The Immortal Life of a Prince

The Etruscan city of Kysry, known by the Romans as Caere, now called Cerveteri, is located in the southern part of Etruria, 40 km north of Rome. Its necropolis is one of the most impressive in the Mediterranean and constitutes a rare and precious testimony to Etruscan civilisation, so much so that in 2004 it was included in the UNESCO World Heritage List. It was one of the noblest and most powerful cities of the Dodecapolis, a confederation of the most influential Etruscan cities, and controlled a vast territory and a large stretch of the Tyrrhenian coastline, where it had three ports: Alsium (Ladispoli), Punicum (Santa Marinella) and Pyrgi (Santa Severa), a sign of its absolute supremacy over trade in the Tyrrhenian Sea. Thanks to these commercial exchanges, Caere came into contact with the highly refined cultures of the Phoenicians and the Greeks, who profoundly influenced the culture and economy of the city which in the 7th century B.C., governed by a ruling class of aristocratic princes, experienced sudden expansion and widespread prosperity, evidenced by the exaggerated pomp and circumstance and the wealth and prestige of imported materials, which are also evident in the luxury and sumptuousness of the tombs. The Prince’s Tombs of the Banditaccia necropolis show us the amount of resources and wealth that the Etruscans invested in the preparation of all the apparatus necessary to accompany the deceased to the afterlife where they would continue their journey in flesh and blood. And it is because of this belief that it was necessary for the deceased to have with them everything that had accompanied them during his earthly life: their home, furnishings, pottery, food, weapons and jewellery. The tombs took the form of dwellings and, in the case of princely burials, were elaborate, rich and luxuriant, with trousseaus, painted walls, decorations and prestigious furnishings that were never chosen and arranged at random, but selected according to complex codes and rituals, to translate the identity of the deceased into a concrete image, exalting their rank, highlighting their gender or the function they had played in society. Through the incredible architectural expressions of its tombs, the Banditaccia necropolis encloses and preserves over time the image of the power and splendour with which the princes desired to be accompanied on their last journey towards their immortal life in the City of the Dead.

The new home of the prince on his way to his eternal life must have the same comforts and splendours as he had in his earthly life. His tomb is the link between past and present generations, it is the manifestation of his social affirmation and wealth. The “Tomba dei Leoni Dipinti” (Tomb of the Painted Lions) is inside a monumental mound, representing the shape of an immense circular hut, dug into the depths of the rocky bank and topped by a cone of earth that represents its roof, grandiose from all viewpoints. It is one of the first tombs to have an elaborate and complex interior, divided into several rooms connected by corridors, with the idea of a large princely home, well expressed by the chiselling of the stone to reproduce roof beams, pillars, doors, windows, decorated beds, even large baskets for food offerings, but above all, the wall paintings that gave the tomb its name. Indeed, the back wall shows a man between two lions facing each other, in red, black and white, which must have been the last in a long line along all the walls, unfortunately no longer visible today.

The “Tomba Degli Scudi E Sedie” (Tomb of shields and chairs) is inside the same large tumulus to which it gives its name as the Tomb of the Painted Lions, but it is from a slightly later period, namely the first half of the 6th century BC. As early as 1834 there was news of its existence, probably because of its size although it was partially buried. It was excavated in the early 1900s. This is also the tomb of the richest people in Caere, ancient Cerveteri, and its layout reveals the rise of the square tomb typology, a more articulated and evolved style than the previous ones, which reproduces, in its imposing simplicity, the Etruscan house of that period, and is still a symbol of the owners' desire to display magnificence and refinement. The entrance faces north-east and is accessed by a short corridor. The interior is divided into two lateral burial chambers, with the main chamber opening at the front: a large atrium with carved funerary beds modelled on the wooden ones in their dwellings and, on the back wall, three doors leading to three chambers. In the space between the doors, two thrones with curved backs have been carved out of the tufa, on which terracotta statues and footstools were probably placed. Carved into the tufa are 14 finely crafted shields and traces of colour that were used to liven up the environment.

The “Tomba Degli Animali Dipinti” (Tomb of the Painted Animals) which also gives its name to the tumulus that houses it, is one of the manifestations of probably the highest moment of Etruscan funerary architecture, at a time, the end of the 7th century BC, when monumental houses were the result of the fusion of large huts and never before has this magnificence been better represented in the funerary monuments of aristocratic families. The idea of opulence and power is also unmistakably rendered here in the eternal home of its inhabitants. The rectangular layout, divided into two or three rooms by pillars, but also the finishing touches and decorations of the ceilings, beds, etc., are present in the tumuli of this sector but not in others. All these tombs, dating to the same period, were evidently built by the same workers who were entrusted with the construction of the funerary monuments in this area of the necropolis. The entrance faces north-west with a long corridor, the dromos, leading to the first two side chambers, followed by a circular vestibule and the entrance to three consecutive chambers with two monumental funerary beds on the side walls of the second chamber.

The Moretti Tumulus is of average size compared to the large surrounding tumuli, but it represents the largest and most complex chamber tomb in the necropolis. It has no less than ten burial chambers: seven of them open onto the large atrium, characterised by its rectangular plan with the long side being transversal, rather than longitudinal, and the two monumental columns carved out of the rocky bank, while the other two chambers face directly onto the sides of the entrance area.

The last large mound is the Tomba della Nave (Tomb of the Ship), one of the most ancient in this series, which owes its name to the depiction of a sailing ship painted on the wall of the right side chamber, but which unfortunately is no longer visible today. In the opposite burial chamber there is a large bed, but your attention is certainly captured by the striking ceiling carved to represent the wooden structure of the circular roof with the beams of the huts. 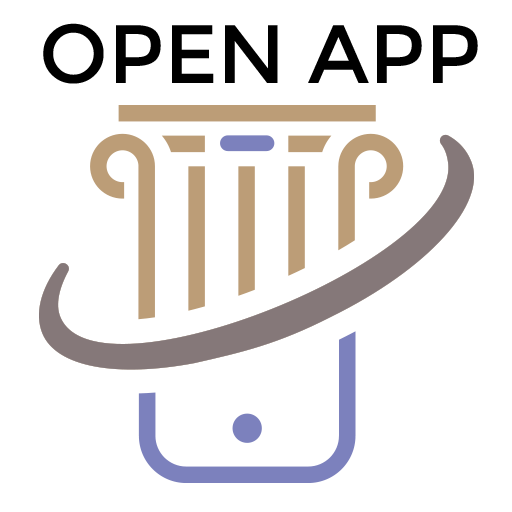 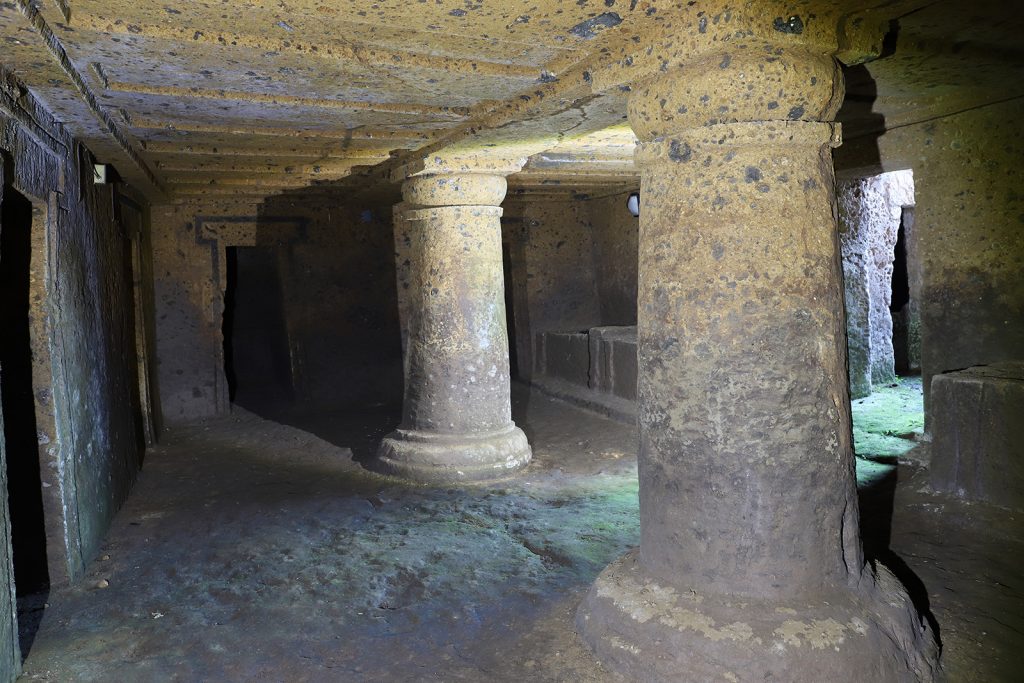 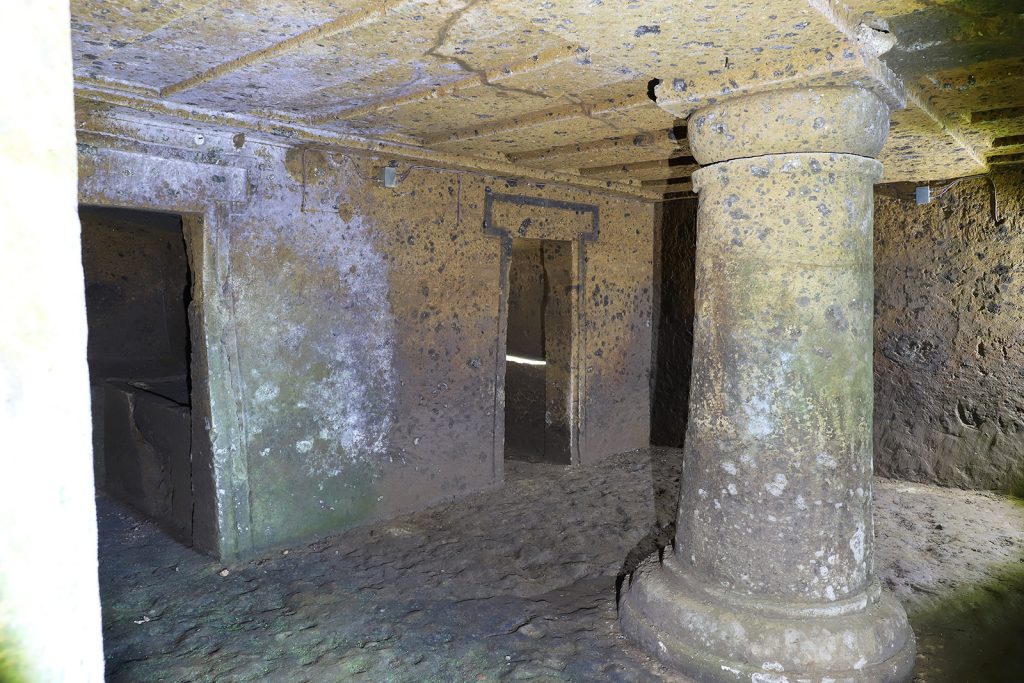 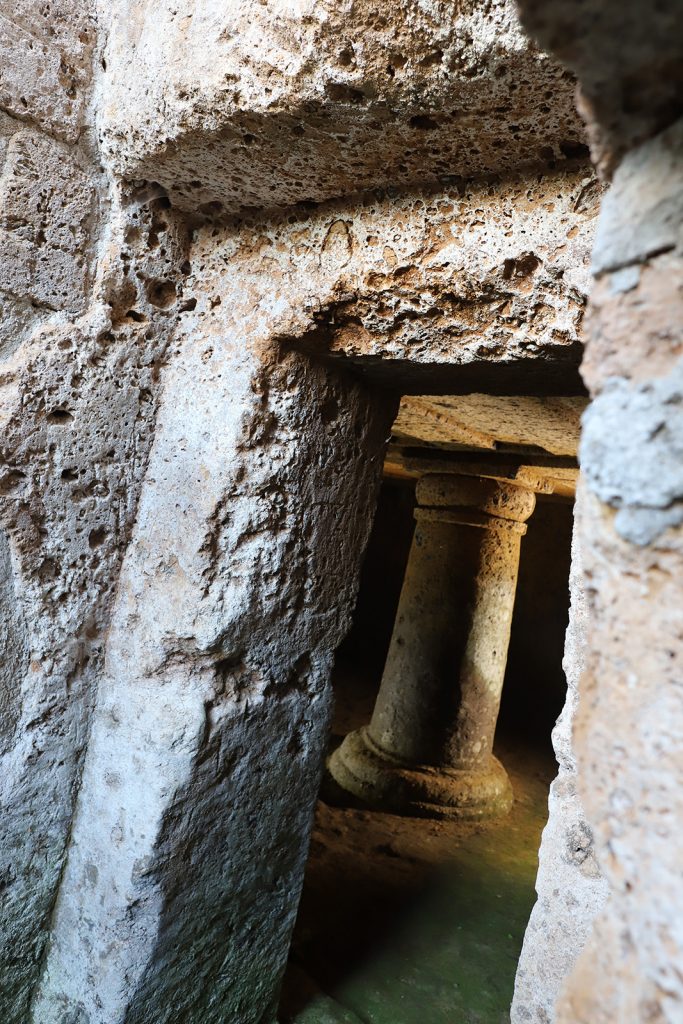 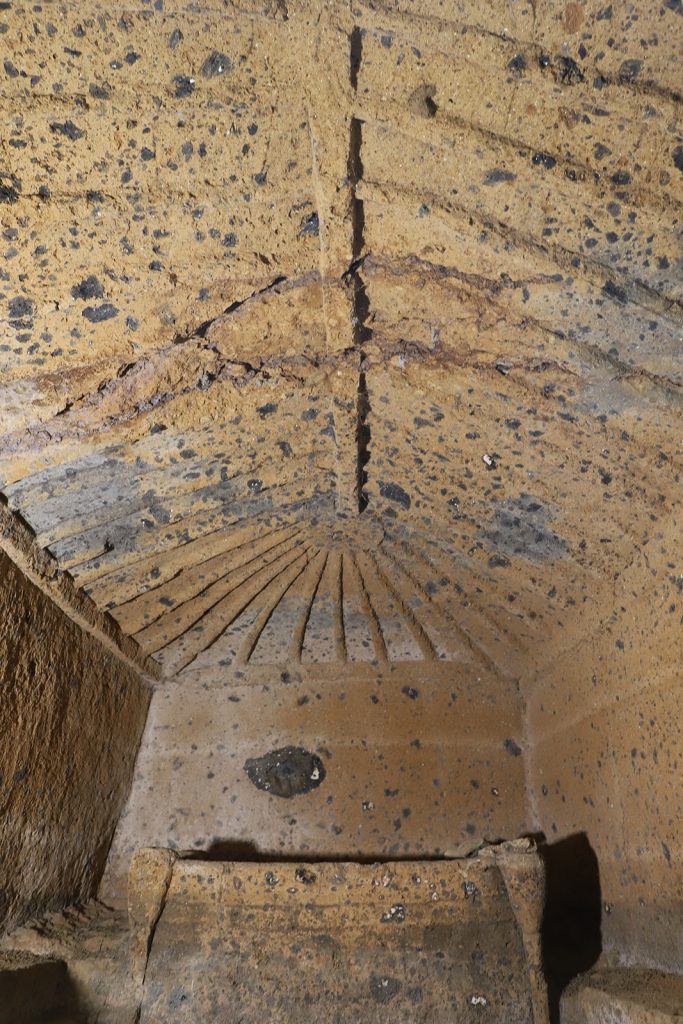 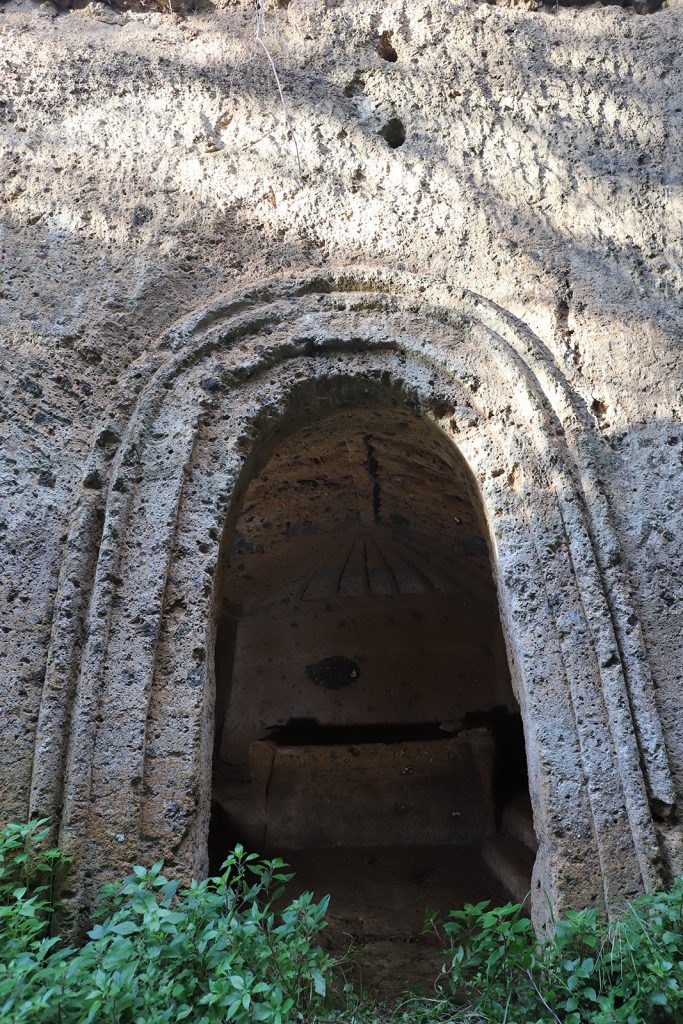 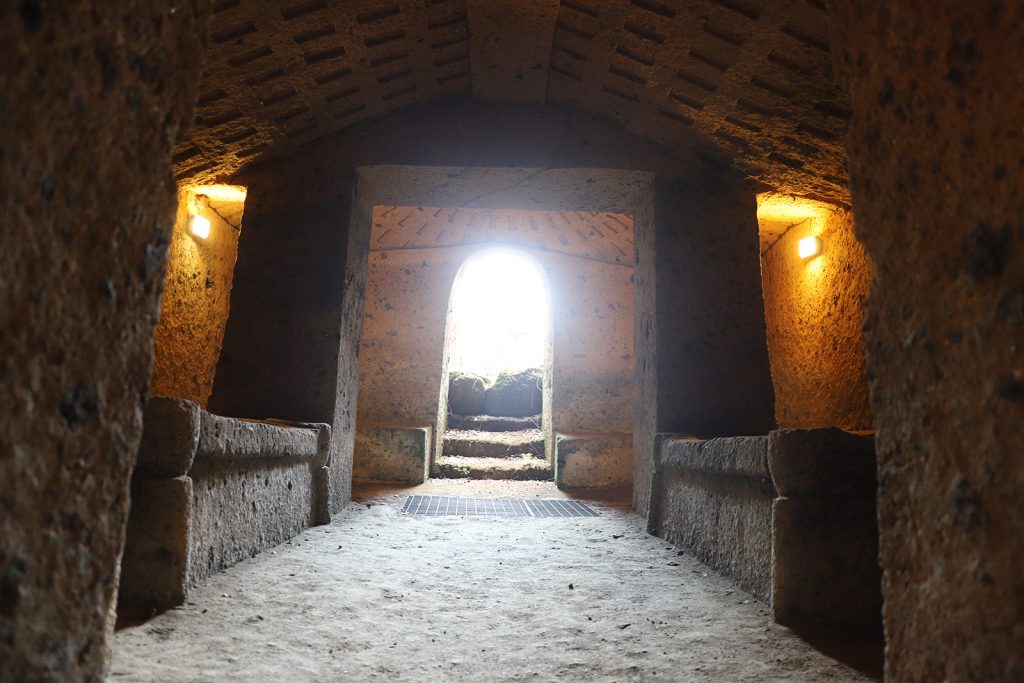 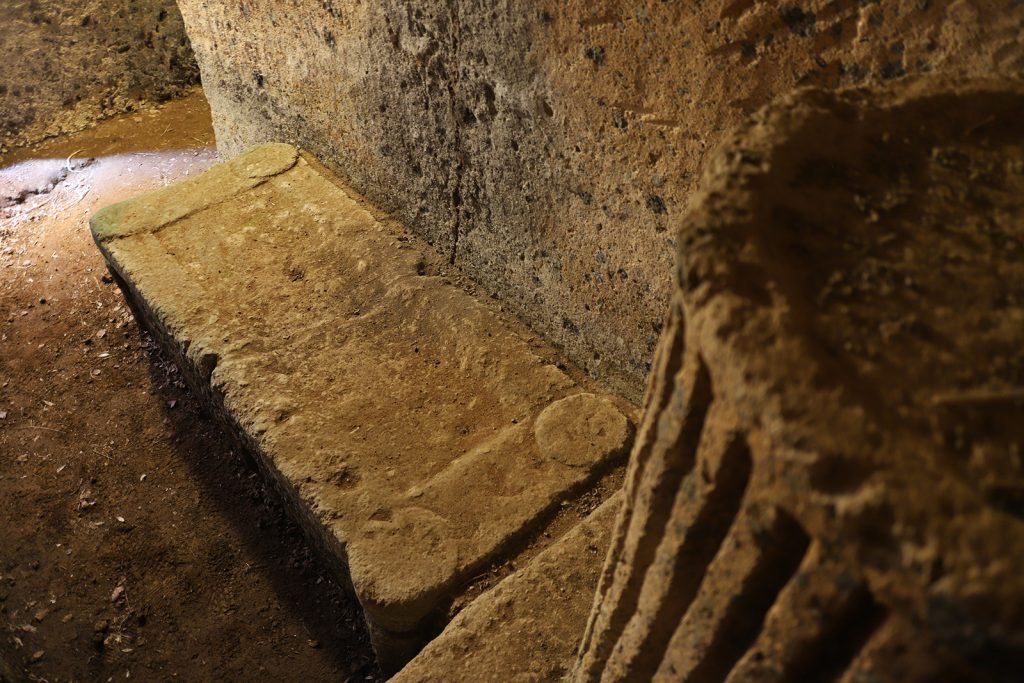 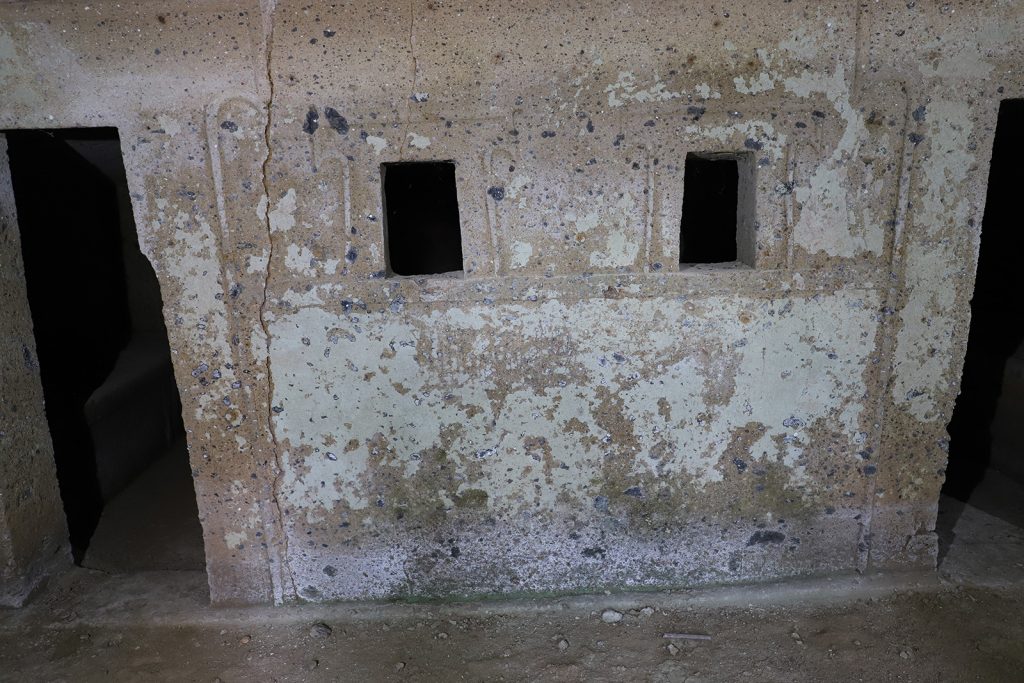 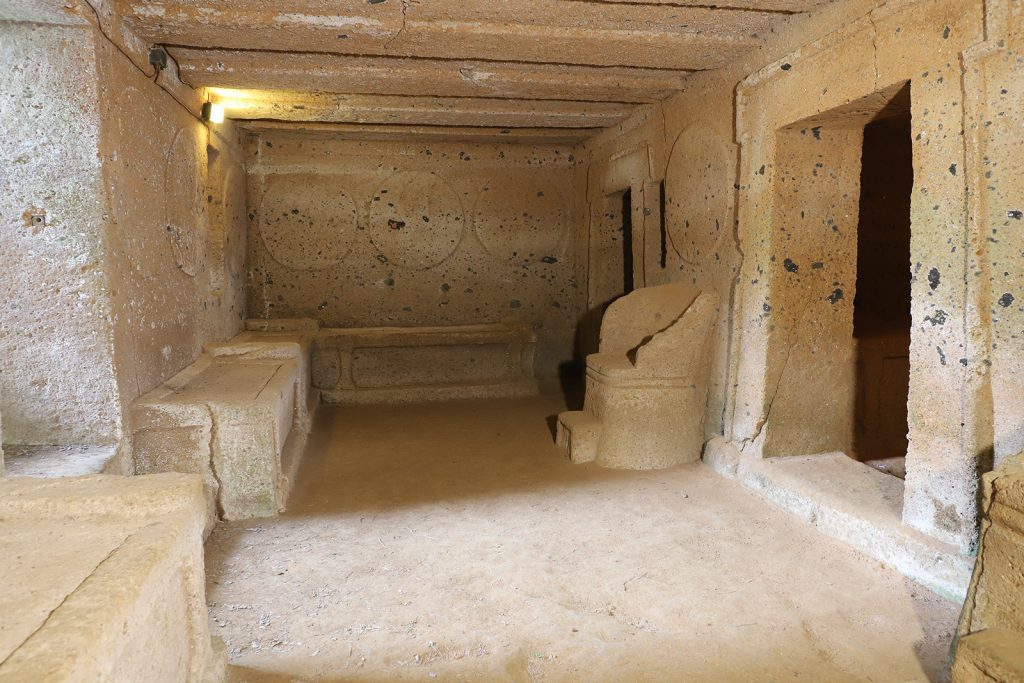 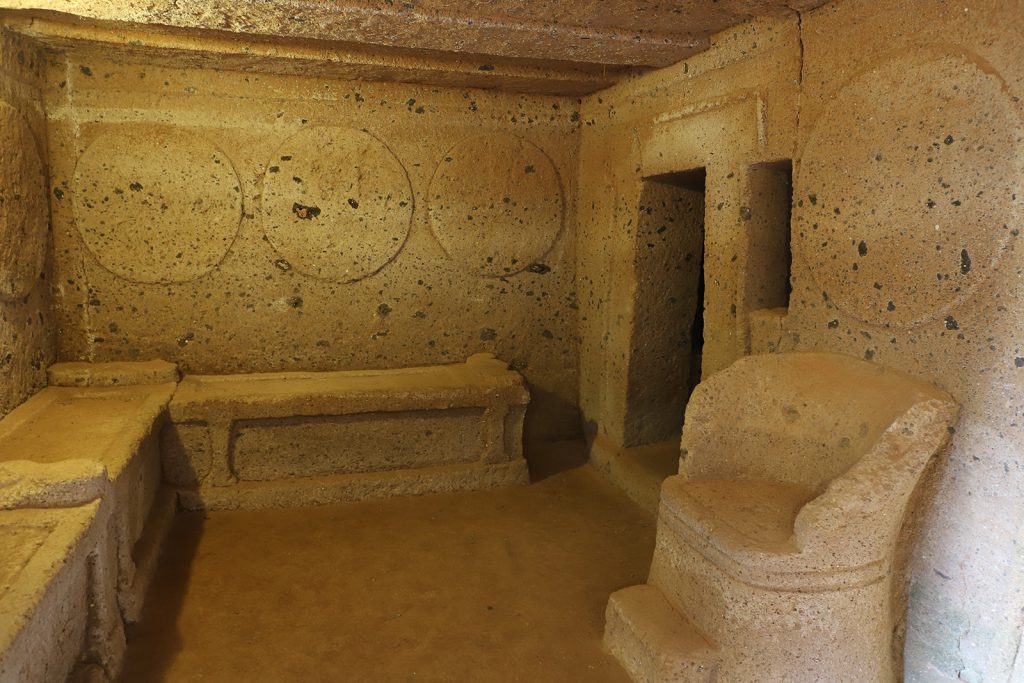 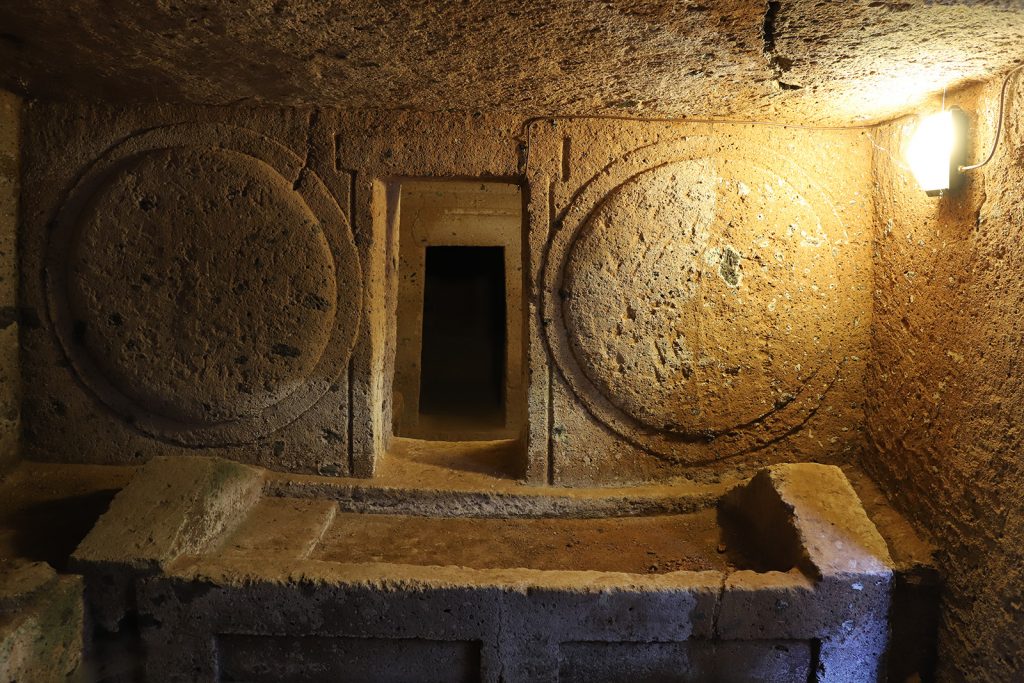 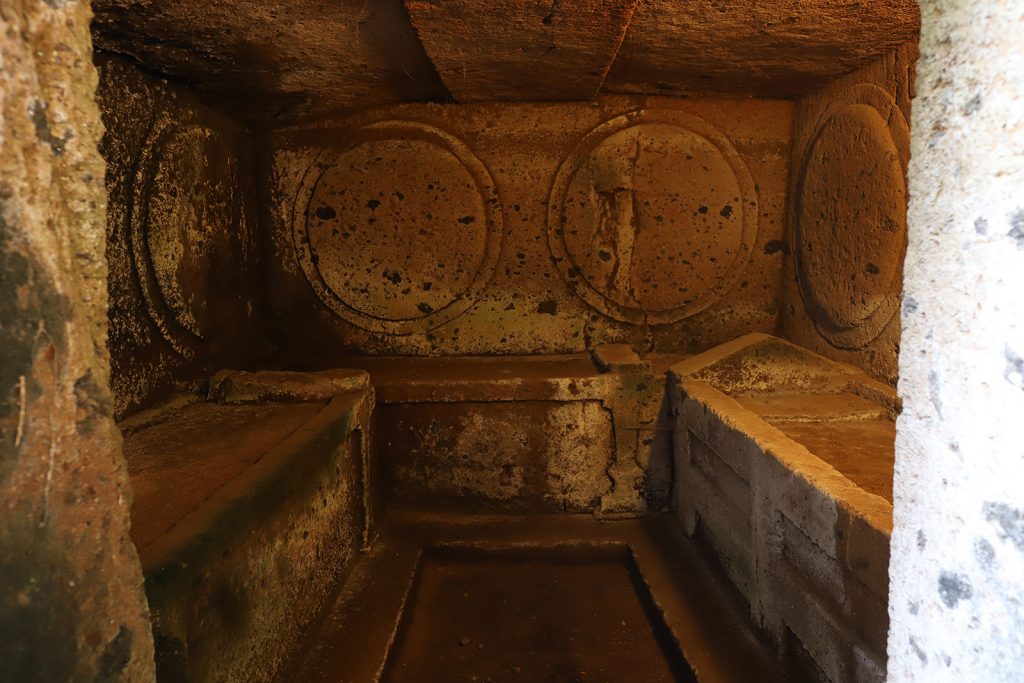 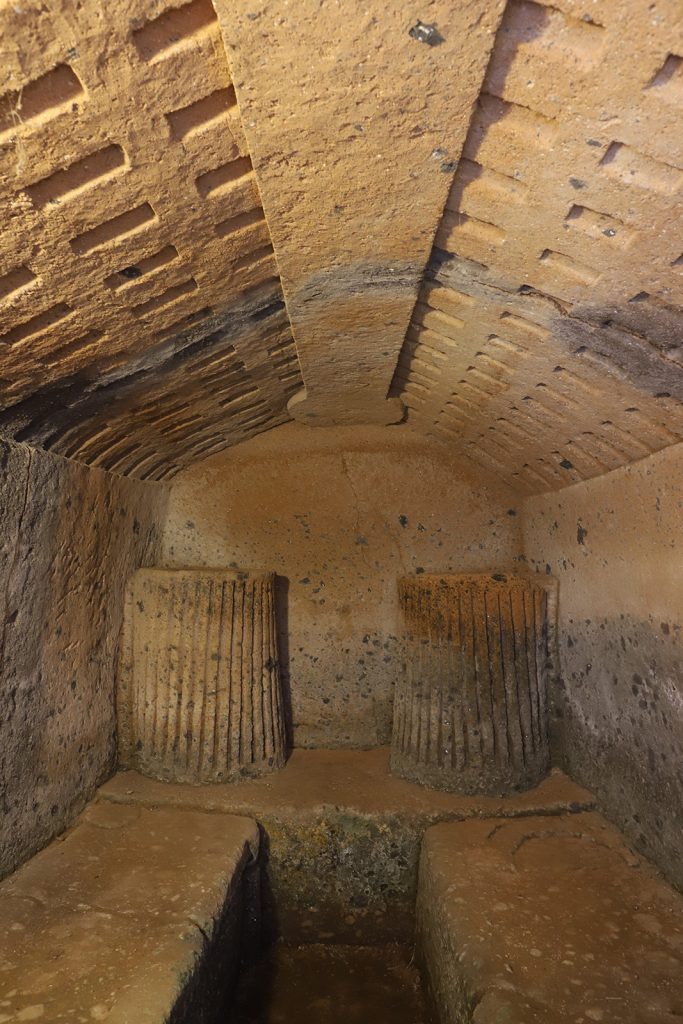 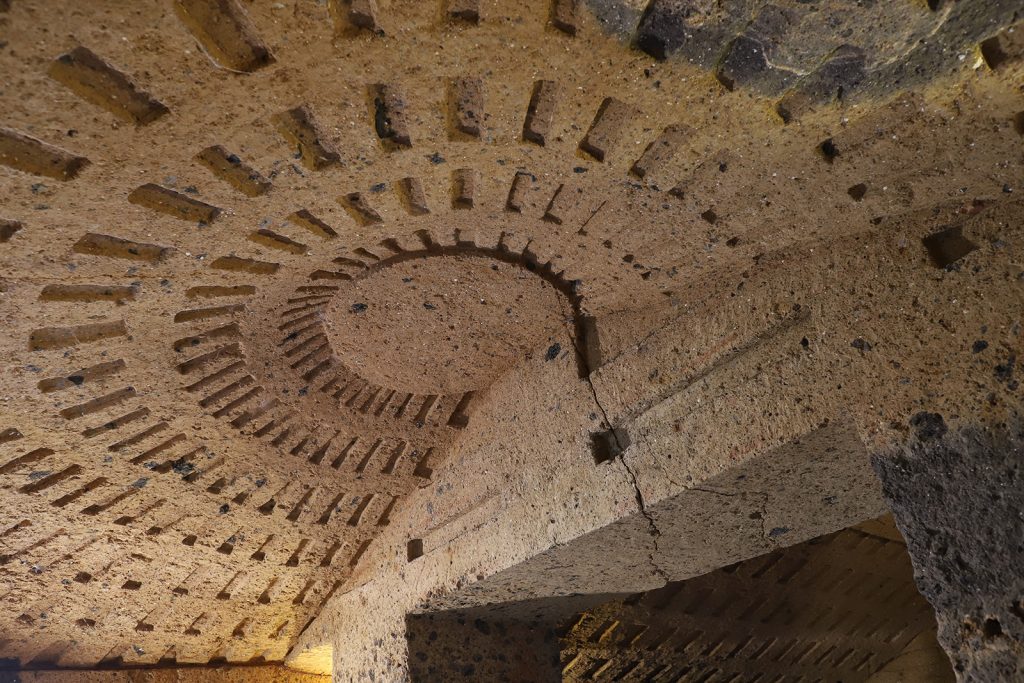 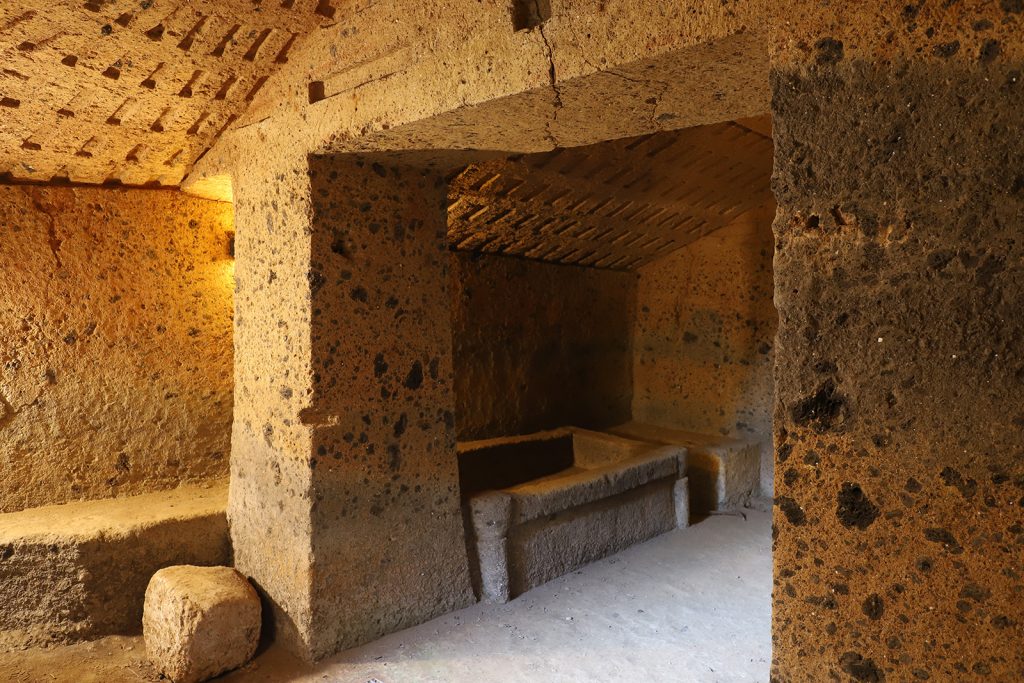 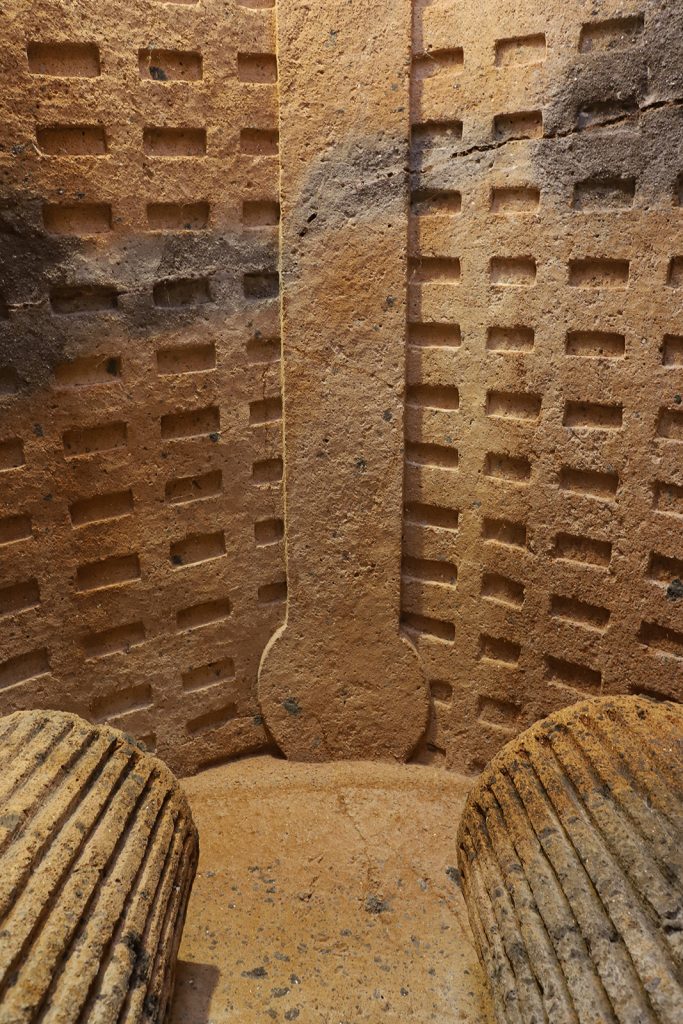 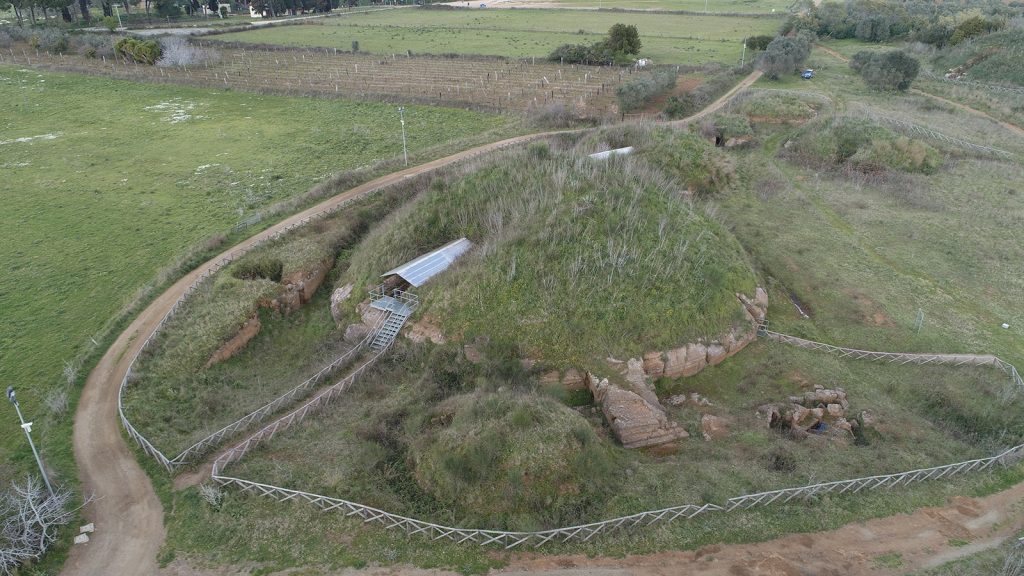 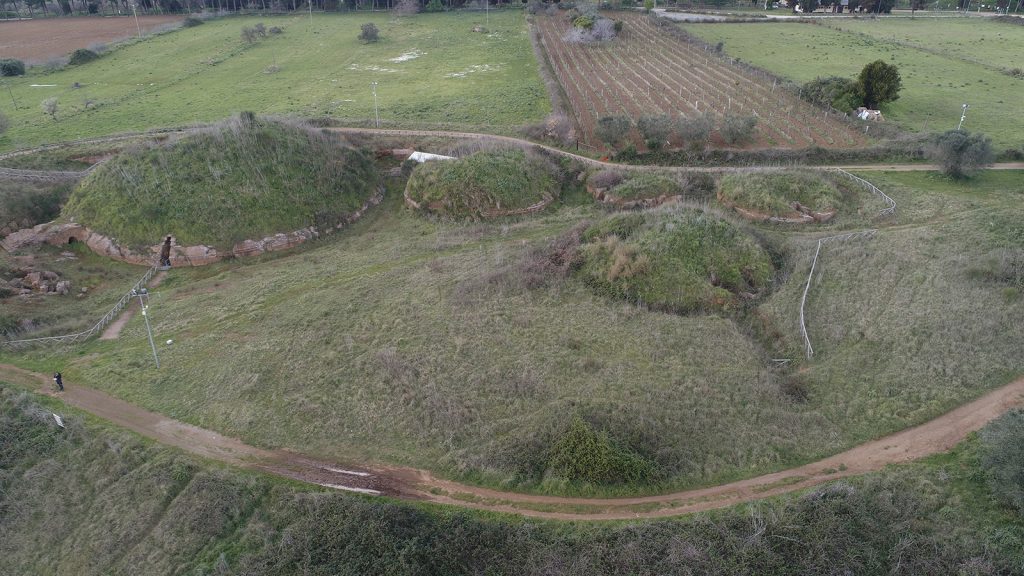 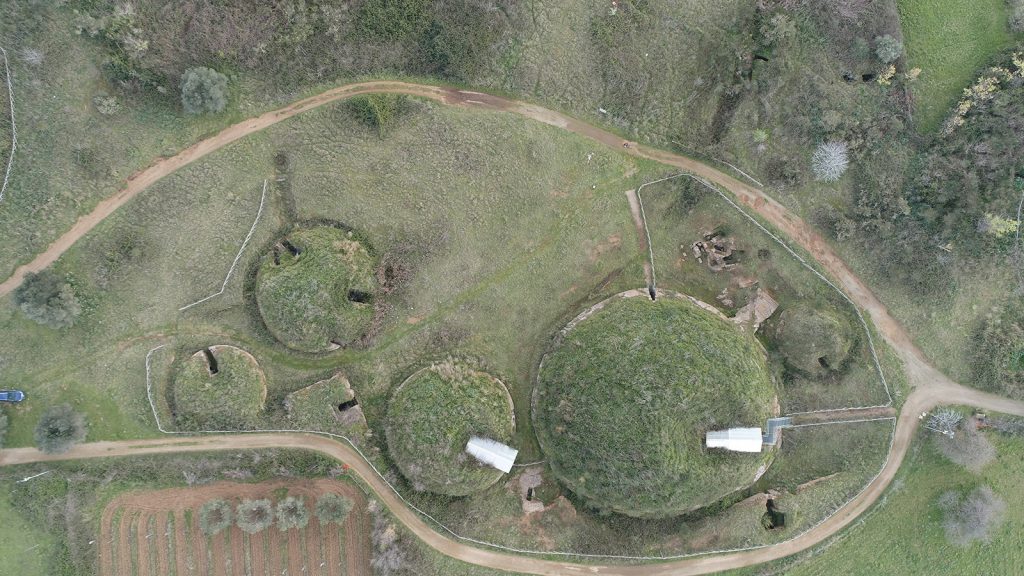 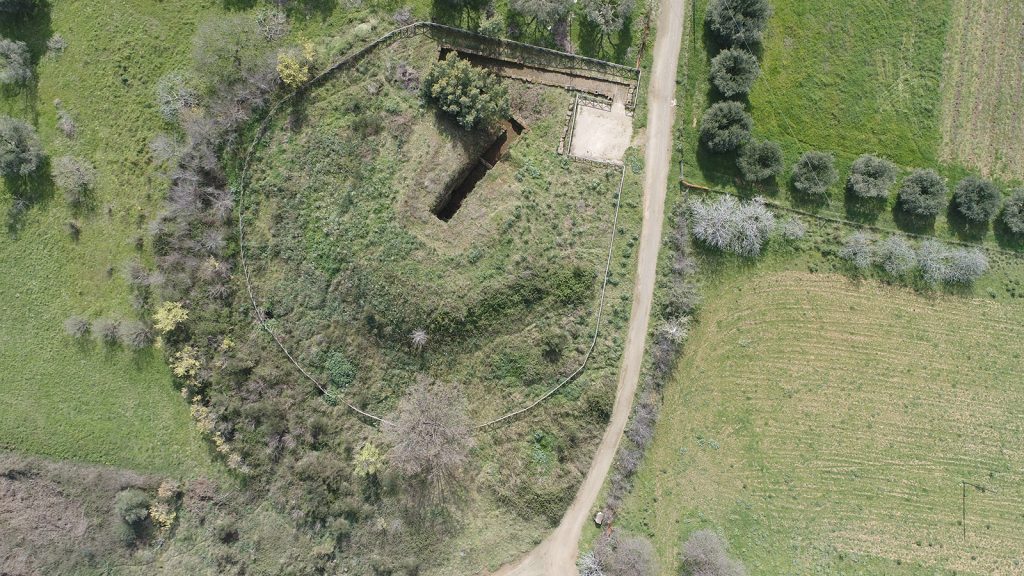